Lee ‘Scratch’ Perry & Daniel Boyle: Recording Back On The Controls

Nevertheless, Perry admits he misses Black Ark — where, equipped with a TEAC four-track tape machine and Soundcraft desk, he created some of the most enduring records in reggae history.

has worked with and produced for a wide variety of artists, including Bob Marley and the Wailers, Junior Murvin, the Congos, Max Romeo, Adrian Sherwood, the Beastie Boys, Ari Up, the Clash, the Orb and many others.

Whatever their differences, for the rest of his life Marley would return to Perry in search of inspiration, advice and to occasionally collaborate on songs like “Jah Live.” “The only person Bob worked with whom he really respected was Lee Perry,” says Chris Blackwell, who would assume production responsibilities for the Wailers from Perry.

Skyward Recording Studio - San Diego's Professional Music Recording Studio. We have been busy serving many various musical genres from both local artists and regional/national artists. Skyward Recording Studio is a boutique operation that attracts passionate  artists who are particular about the quality of their sound. Polishing your final mixes or tracking your songs to  sound their absolute best is our specialty, and we put a great deal of care into our work.

SD Voyager reached out to us to cover our story. We want to thank them for taking interest and supporting Skyward Recording Studio. Here is the link for the complete SD Voyager Local Story interview with our chief engineer Ed

On any other day, it would be hard to know quite where to begin when talking to Lee “Scratch” Perry. The Jamaican legend kickstarted Bob Marley’s career, has worked with everyone from Paul McCartney to John Martyn to the Clash, and has racked up countless records as both artist and producer.graph here.

Launched more than four decades ago, almost every engineer has had their hands on a Soundcraft at one point their career. Read on the discover the magic behind these rock-solid consoles.
Best of the British

Soundcraft founders, Phil Dudderidge and Graham Blyth couldn’t have been better placed to understand the needs of the working engineer. One of the bands that exemplified the transition from the club to the stadium was Led Zeppelin and Phil Dudderidge was their first dedicated the live sound engineer.

As George Harrison was putting together The Travelling Wilburys, he and producer Jeff Lynne decided that they needed a location for the recording that was away from the glare of Hollywood. Harrison called Bob Dylan and asked if he could use his studio and surreptitiously invite him into the project. Part of the album was recorded in Dylan’s garage, another was recorded at Dave Stewart’s (of Eurythmics fame) house.

There were some top-shelf mics on offer, including those from AKG, Neumann, Telefunken and more. At the hub of this session – populated by some true heavyweights of 20th-century songwriting – stood the humble Soundcraft 1600. The record is a high watermark in terms of engineering, the sounds imbued with depth and coated with detailed top-end sparkle. The Soundcraft channel strips were well and truly up to the task.

In the previous decade, Lee ‘Scratch’ Perry added a Soundcraft console to his arsenal. In People Funny Boy: The Genius of Lee ‘Scratch’ Perry, David Katz writes: “The Soundcraft enabled Perry to construct a broader sound that was richer, fuller, more complex and resonant with deeper textures.” It’s hard to think of a more significant endorsement than from the preeminent figure in dub music, a style with fascinating and fluid soundscapes at its core. 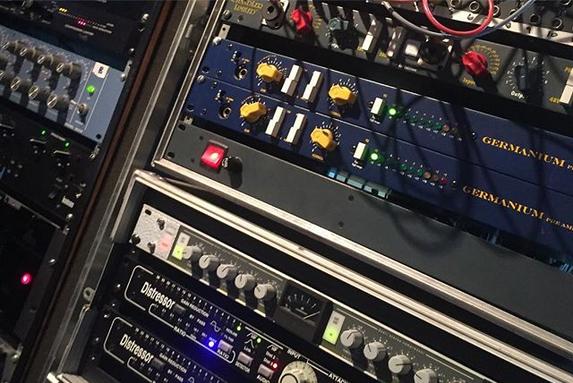 It’s worth mentioning that small 1980’s SoundCraft desks, including the 400, 500, 600 and 16- or 24-bus 6000, are also exceptional value for money. And you can always put a NEVE sticker over the SoundCraftlogo and trick Mr. Gearslutz into believing you’ve robbed a bank; I doubt he’d know the sonic difference.

Skyward Recording Studio is now offering exclusive block rates for San Diego CA. artists. Ask for the "Rick Rubin" deal - we truly appreciate the records Rick has produced; from Avette Brothers, Slayer, Johnny Cash, RHCP, Tom Petty and the Heart Breakers, System Of A Down, to Kanye and Beastie Boys -

The diverse, cross-genre career of the legendary producer is now an inspirational block rate for San Diego California musicians and artists. Do you yourself a favor and listen to Rick.  Come in and record your HIT RECORD with us! We're passionate about making classic albums and helping local artist reach their full potential.

The house, if publicity spin at the time was to be swallowed whole, offered the kind of blood, sugar, sex and magic that would appeal to a band such as The Red Hot Chili Peppers. Built in 1917, it had, allegedly belonged to Twenties screen idol Rudolph Valentino; Harry Houdini reputedly lived next door. Jimi Hendrix may have been a one-time tenant. Keidis was convinced that it was the house where two of The Beatles had first tried acid (even though Harrison and Lennon had gone on records saying that it happened in London, with their dentist, no less). The Chicago Sun-Times gave their own interesting spin when they announced, probably wrongly, that the band was working in a "big Hollywood mansion where Jimi Hendrix allegedly turned The Beatles onto LSD for the first time".

Regardless of its shadowy past, the mansion was the ideal environment for the band. As far as Rubin was concerned, the "in-house" idea may not have worked for all acts, but it was right for the Chili Peppers. "I thought being in a house, in an environment different that they'd ever worked in before, would give the whole project a different flavour. it just changed the feel of the whole project.

"What I thought was fun about the idea," he said in a rare interview, "was this was a band that had made a fair number of albums prior. And just to kind of clean the slate of everything they had done before and start with a fresh approach."

Rubin and crew, including engineer Brendan O'Brien, who would go on to major acclaim when he worked with Pearl Jam, started to build a studio as as spring gradually bloomed into summer. The production team spotted the sonic potential in many of the mansion's rooms. They transformed the library into the main control room, shifting Neve and Soundcraft consoles into the room.


We are readily available via telephone or email. Feel free to contact us with any questions you may have. We're happy to help!

"Mike has three consoles," states Dodd, "a small 12-channel NEVE sidecar with old 1073s [preamp modules], which he purchased after I used it to track the Traveling Wilburys' second album; a 24-channel NEVE console with 1073s; and a SoundCraft1600, which is the one that I mixed 'Mary Jane's Last Dance' [a hit single off the group's Greatest Hits album a few years ago] on. So Mike has 36 channels of 1073 and 24 channels of SoundCraft that he records through now. Just about every microphone that he wants to use has a dedicated channel strip, which makes the recording process for him quite simple once it's set up. It's just a case of selecting tracks, and off you go. He has enough outboard gear to support that, as well."

My friend engineered a tom petty record at Mike Campell's(petty's guitarists) house. They had one of those sc 1600's and a bunch of NEVE pre amps. He said after a while, they just started using the SoundCraft pre's because they liked how it was sounding over the neve's . go figure.

1. EMBRACE LIMITATIONS
Eurythmics recorded its first album, In The Garden, in the then-cutting edge 24-track studio of German production whiz Conny Plank (Kraftwerk, Ultravox, Devo). They had the money, the personnel and the ideal setting to create their new wave sound—and the album tanked upon release.

Broke and faced with recording the follow-up, the duo begged their way into a bank loan and bought a simple TEAC 8-track recorder, a second-hand Revox 2-track to mix down to, a Klark-Teknik spring reverb, Bel noise-reduction system, Roland Space Echo and a used Soundcraft 16-input mixing desk. The only place they could afford to put all that was a cramped loft above a picture framing shop, where they couldn’t record with an open mic when the shop was in woodworking mode downstairs. This was where they recorded the breakthrough Sweet Dreams Are Made Of Thisalbum, becoming an worldwide sensation overnight.

Source: The Art of Record Production: An Introductory Reader for a New Academic Field

UK engineers based their choice of recording desks very much on the sound of the EQ at the time. The rock studios went for Trident and Helios while MOR and general studios preferred SoundCraft, NEVE, and sometimes mine! - Ted Fletcher:

About the Skyward Recording Studio made in England vintage British SoundCraftALL analog console:  First of all it totally kicks ASS..secondly it is an all British hand built, point to point wiring console. This thing is heavy and built like a tank since it was designed and built in the pre-digital days, a time when quality and handmade products were the priority. Additionally, the Soundcraft console was launched into direct competition with SSL, Neve, API, Trident, Quad 8, EMI and other classic consoles of that era.

We are beyond satisfied with the console's mic preamps, EQ capabilities and the wide stereo image. In addition, it is awesome to mix through the console and it really shines while tracking! Starting with proper gain stage levels and simply engaging the EQ in the channel path to carve out unwanted frequencies or add top end / bottom end / mid's to achieve a great tone from the start is the best!  Additionally, ProTools loves receiving tight and punchy sounds from the get-go. Leave all your faders up in ProTools and set your tracking levels by using proper gain and EQ settings- all easily done using the beloved all analog british made console.. those brits were making beasts back in the day.... 70's and 80's SoundCraft consoles were very popular in England and in the states.. many  “platinum” and “gold” classic albums were cut using SoundCraft consoles.

Source: "Mixing, Recording, and Producing Techniques of the Pros"

The differences between two esoteric preamps is far less significant than changing the gauge of your guitar pick or rolling back the volume knob on your guitar amp about 20%, so there are all of these night and day differences. Switching the preamps from Soundcraft to Neve is not going to change the character of who that person is as an artist or even change the feel of the music. People get obsessed about the fact that some transformer has a little bit more steel content in it than nickel content, but I'm way more interested in what is happening with the guitar in that guys' hand.